A bit of context: MMO PVP is dead, at least in ranked terms. Whilst PVP thrives in MOBAs, FPS and in games like Hearthstone it has been shown conclusively in MMO after MMO that no one can match the numbers of players that WoW has in ranked PVP. In a sickening example of the Bandwagon Effect, we know from surveys and common sense that the reason people keep playing and PVP’ing in WoW is, well, because people are playing and PVP’ing in WoW. Much catch 22, very slow ranked pops in other games.

The disappointing participation in SWTOR’s ranked PVP was followed by similar failures in games like TESO and Wildstar.  Simply put, they all had a crack at it, they all had a gimmick and they all failed to deliver. The Red Eclipse was no exception.
Now, ranked PVP in SWTOR has always suffered from the “goldfish bowl” effect. There were a handful of teams playing each other in full view of everyone else and if you were losing those games then, without cross server or a larger pool of teams, it stopped being fun very quickly. The initial surge in activity, excitement and ranked pops died because universal truth of PVP: Not Everybody can be Top Dog.

And if you have spent a while thinking you were top dog and, even worse, acting and talking like you are top dog only to find yourself pressing respawn repeatedly, well…clearly some egos were hurt. They were hurt when ranked was introduced months after launch (a huge mistake by Bioware,) they were hurt again after the initial server merges and some did not recover from the second set of merges.  On every server, teams found themselves knocked off the top spot and on every server players and teams started to disappear.

In September 2012 I started playing again after having quit before the summer, joining a couple of old mates who had since joined a guild named after another guild on the Fatman server -Tactical Wookie Assault Team: TWATs for short. TWATs, queued ranked every night and largely played against one team – Nostrum Dolus. Nobody else wanted to play, it seemed.

Now, there were plenty of people and guilds who did want to play, but everybody seemed to manage to get 6-7 people together and couldn’t quite fill those last spots.  There were accusations of queue dodging, people were called “pussies” (because playing video games takes bravery,) our unofficial server forums were filled with drama and ill feeling festered. Guilds stopped queuing, Nostrum actually had to offer an 8 million bounty to get people to play them (later single handedly won by Snave, although he doesn’t like to talk about it.) People were leaving the game and activity rates were dropping. TWATs didn’t take the game quite so seriously and therefore kept playing but game balance issues such as the overpowered nature of smash spec, when stacked, and the frustrating mechanics of bubble-pop meant that players were starting to leave SWTOR or at least stop PVP’ing. We needed more ranked teams, we needed more activity and there was nothing in the game that would bring that – no new content, no grand launches, no influx of new players. Therefore, it was clear that participation would need to be generated organically, from people already on the server.

My assessment was pretty simple – The PVP’ers of The Red Eclipse fell into three groups:

Group one would take care of itself provided there were people to play against. Sitting in the queue, all night, without a single ranked pop had started to be a problem for them.

Group two were of no use to anyone. They would usually cause more drama than anyone else and no time or effort should be wasted on them.

Group three was the opportunity. There were plenty of big guilds, high quality PVE guilds, casual PVP guilds. This meant plenty of people who could enjoy ranked potentially. It was them we needed to focus on.

For my part in this, I was a relatively unknown player and not any special talent as a PVP’er, therefore my impact on The Red Eclipse ranked scene would be limited. I decided to focus on the little things I could effect. I reached out to and built relationships with every ranked team, every potential ranked team and every ‘big’ guild. I spent time talking to people and effectively ‘selling’ the enjoyment of ranked on the forums and in game. On nights without other teams to play, I would go back to those who were reluctant but curious and encourage them to play against TWATs. We would relog to alts if they preferred, or play as normal but we made a clear and conscious effort to not talk shit and to be super friendly.

Sickeningly friendly. It was almost too much, tbh.

Slowly, people got interested and despite not winning against an experienced ranked team, they stayed interested. This validated my theory on Group Three: Losing wasn’t the problem…losing and being laughed at was the problem.

Things slowly began to improve, aided by the fact that the guys in the top team, Nostrum Dolus, either said nothing (in public, there was plenty said behind closed doors ofc) or were friendly and decent to new teams. This was worth its weight lightsaber-flavoured gold. Frankly, those PVP’ers who today spend half their time talking shit and the other half whining about not having anybody to play should unlock their second brain cell and learn to make the connection between that slow improvement and their behaviour. Anyway, I digress…

Read the rest of Mylex story by following this link… 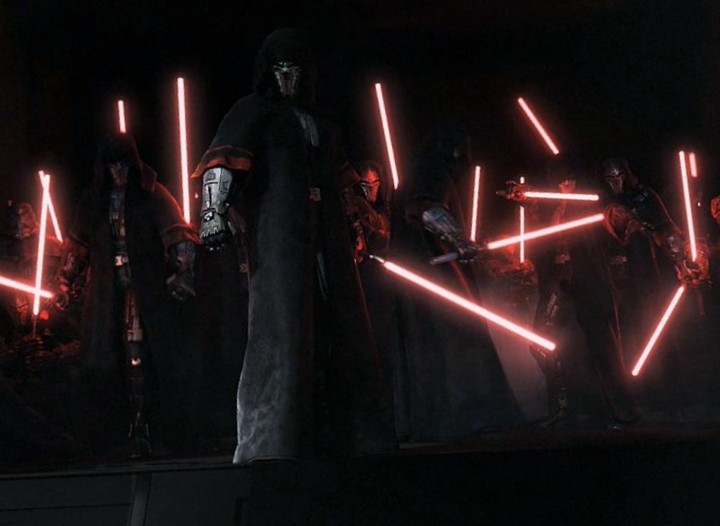