Those people were not elected officials or community representatives or anything formal. They were just the names from the forum. Guys, like me, Anthiz of Reality Check and Etun of Nostrum who ensured that they were perceived as approachable and knowledgeable about the ranked scene.  If you were in Group Three then we could now offer points of contact, enthusiastic welcomes and recognition on the forums that you and your guild were playing ranked, by virtue of the ‘Thank You’ posts the next morning. An excellent proposition.

So, in what might be described as a victory of style over substance, The Red Eclipse ranked scene had started to grow. There was no matchmaking, no rewards, no dailies or weeklies and no class balance – but the number of teams was growing, not shrinking.

Anthiz of Reality Check (who had started to queue more regularly and just shaded out TWATs as the number 2 team on the server) struck a deal with Dakaru and Etun of Nostrum, which was then offered to other interested teams.

The deal was this: If you don’t run smash and bubblepop, neither will we.
This didn’t last forever, it was certainly not without challenges and it created a secondary set of balance issues (in the land without smash sentinels, the two pyro team was king) but it established a very important principle. The principle was that the players could agree ‘rules,’ honoured and enforced by the top three teams (Nostrum, Reality Check & TWATs,) that increased the Time to Kill, decreased the amount of CC (bubblepop) and made ranked PVP more accessible to new teams. I don’t want to be cheesy, which will come as a shock to those who know me, but it was an exciting and gratifying time. In fact, it would have made for a fantastic dissertation for a Sociologist’s degree! Key people in the established ranked guilds started to come together with a common understanding about what was needed to get Group Three to play ranked and how to keep them playing once they did. This was impressive as the three teams at the heart of this remained competitors and not everyone in those teams cared for the rules, the community or the new guys. Part of what made those teams good was that they boasted excellent PVP’ers and it is not unfair to say that good PVP’ers are not always known for their manners! Strong leadership was needed to retain the services and respect of these players, whilst protecting the growing ranked scene that we had forged.

Having established a broadly positive atmosphere around ranked, this agreement on ‘Smash and Bubble’ was a watershed moment. With this in place, the number of people in group three increased by an order of magnitude….TWATs had three ranked teams, Reality Check had four, Dxun had two, another bunch of guilds had a semi regular team or two.

We began to use IRC to co-ordinate queues, so that experienced and geared teams played each other, leaving newer teams to face similar challenges – another example of where the community picked up the slack from Bioware’s total disregard for ranked PVP. We offered advice, shared players, talked on the forums and  worked hard to deal with the inevitable dramas and fall outs that accompany PVP in any game.

Nostrum took about 5 weeks off for RL reasons.

It was mid December to mid January, I think. In the time they were away, teams could play and learn against each other in a vacuum and when Nostrum returned they found a more competitive ranked scene than when they left. Reality Check and grown, split and evolved and were now a force to be reckoned with. Of the old TWATs team, by February only two of use were still playing but we picked up new mates here and there, queued whenever we could and made PUG teams when we couldn’t. Centurion had emerged from a split with Reality Check and were a credible team, as were Dxun & Ctrl Alt Elite. It was a great time be playing and so many epic games were enjoyed by all. I firmly believe that, for a few months, there were a hundred or so people on the Red Eclipse who raced home from work with genuine excitement at the prospect of playing ranked WZs every single day – certainly more than were involved in the highest level of PVE content. A statistic of note, given that this was a PVE server.

Of course, a lot of people had a lot to say about these ‘arrangements.’

As I mentioned earlier, I am not a ‘good’ PVP’er. I wasn’t in a top team. I wasn’t bad and I managed 2k rating with Nostrum being my most frequent opponents, so I certainly saw my share of victories, but I wasn’t elite.

That said, I still took a lot of pride when Nostrum went to the 2.0 PTS and played the Americans. I say played, in some cases it was closer to farmed! Certainly, it is well documented that the top US teams got a serious shock when they faced the top TRE team.

I took just as much pride when server transfers were implemented and we all went to ToFN. That first night, with nearly 30 teams in the queue, was so exciting! As was to be expected, the numbers normalised over the coming weeks but the food chain was clear….Tier 1 was Nostrum, Reality Check and DRAMA (a newly formed team made up of well known players from top guilds like Impulse, Ace & IRS.) They were the Apex predators.

The second tier was a mix of ToFN and TRE teams. Yet, despite coming from a PVE server and despite having had to invent our own rules just to get people to play, our Tier 2 teams were now mixing it with those experienced and well know teams that, pre transfers, had been Tier 1 on ToFN.

My own time was coming to an end with ranked and I didn’t play a huge amount, probably less than 100 games on ToFN. My team had broken up just before transfers with both our healers quitting the game, some friendships had come under strain and I’d lost interest in the SWTOR.  I always felt pride in what the TRE teams accomplished because it is not a stretch to say that some, or perhaps all, of those elite TRE players and teams would have left SWTOR long before the transfers to ToFN if we hadn’t kickstarted ranked on TRE.

And ultimately, it was fairly simple to do. Recognising that there simply were not enough Group One people playing the game, we cut out the shit talk to the new guys, we publicly recognised and thanked our opponents, we agreed rules on compositions to increase the Time To Kill and we knew that the better your team is, the greater your influence. The only choice is whether than influence is positive or negative.

And that is my message to PVP’ers who complain about lack of team ranked in SWTOR today:

Don’t be pricks.
PVP is dead.
If you want pops, then make it fun.
If you want to act like a bad ass and have true competition then stick to LoL or CS:GO.
(PS pls carry me in CS:GO <3) 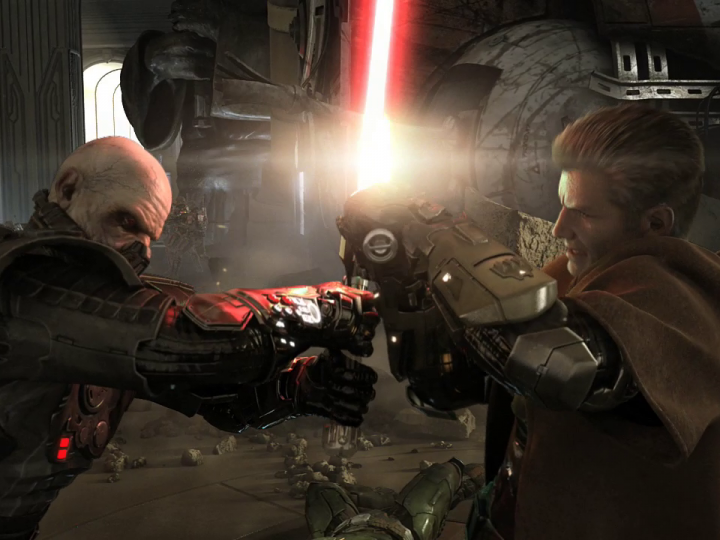 “Rules of conduct” and Ranked